It’s impossible to not get caught up in the excitement with all the sporting events that take place in Atlanta. Atlanta sports provide year-round, live entertainment for thousands of fans. With six professional sports teams and top-notch venues, it’s easy to celebrate sports in Atlanta. Football season is the unofficial kickoff to sports season and while most teams don’t start until September, there are some fantastic events leading into the season that are sure to get you pumped up and ready for kick off. 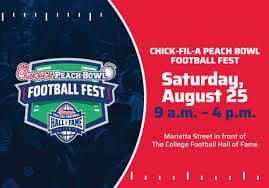 The third annual Peach Bowl Football Fest will take place on Saturday, August 24 on Marietta Street in front of The Chick-fil-A College Football Hall of Fame. This family-friendly, fun and FREE event is to help us celebrate the 150th anniversary of the game and the Hall’s 5 year anniversary in Atlanta! The event includes inflatables, games, a chance to play in the SkillZone challenge, face painters, cheerleaders, DJs, mascots, and more. Be sure to come out and celebrate the start of another exciting college football season and don’t miss your chance to tour the Hall for FREE. 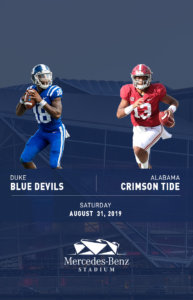 In a little less than a decade, the Chick-fil-A Kickoff Game (sometimes called the Chick-fil-A Classic) has already drawn in many of college football’s most prestigious programs to the field. Even though the regular season matchups are also loaded with intensity, there is something special about starting the season with a neutral site matchup between two teams hoping to be a major contender. The atmosphere completely speaks for itself thanks to the intensity that builds many hours before game time, providing plenty of incentive for fans to scoop up Chick-fil-A Kickoff Game tickets to get in on the action. This year’s matchup is no exception, as the Duke Blue Devils will face off against Alabama’s Crimson Tide on August 31st. 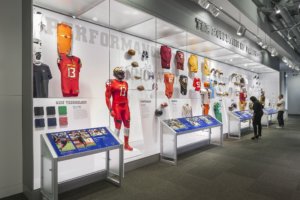 While there are countless perks to life at Atlantic Midtown, one of the best is the proximity to the best sports venues in Atlanta! While you are checking out one of the fun-filled events, stop by Atlantic Midtown! We are open 7 Days a week, Monday-Saturday 10-6 and Sunday 12-6