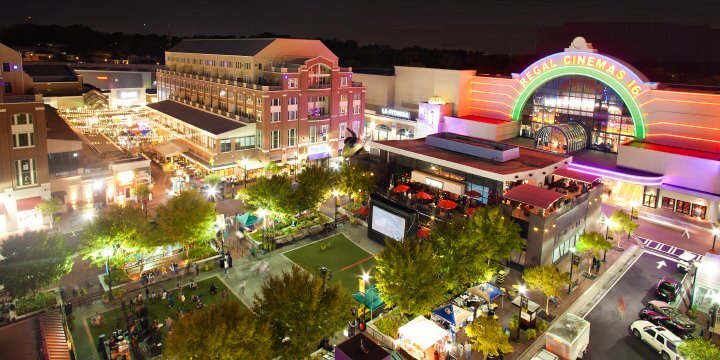 How Well Do You Know The  History of the Spot From Steel Mill to Urban Development? 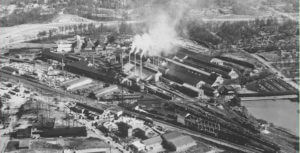 The Atlantic Steel Company housed a large steel mill on the site of today’s Atlantic Station.

Originally founded as the Atlanta Hoop Company in 1901, with 120 employees producing cotton bale ties and barrel hoops, it later became the Atlanta Steel Company, and then in December 1915, the Atlantic Steel Company.

From 1908-1922 Thomas K. Glenn was the company’s president. A replica of his office exists at the Millennium Gate museum in Atlantic Station (if you read our blog on the Millenium Gate, you already knew that).

By 1952, the plant had 2,100 employees and was producing not only hoops and ties, but also “poultry and field fence, barbed wire, angles, round bars, channels, tees, handrail, reinforcing bars, nails, rivets, welding rods, shackles, [forgings] and fence posts.”

Developer Jim Jacoby began putting the project together in 1997 when his company became the property contractor of the land. The redevelopment of the land into what is now Atlantic Station was financed largely by private investment, but was heavily supplemented by a special tax district to pay for city tax bonds for public utilities (streets, sidewalks, and sewers). Its size encouraged the Postal Service to award the neighborhood its own ZIP code: 30363.

In October 2003, the very first residents moved into the development. The 17th Street bridge was completed in January 2004 and the first round of retail establishments opened in October 2005.Atlantic Station received the EPA’s 2004 Phoenix Award as the Best National Brownfield Redevelopment, as well as the Sierra Club’s 2005 America’s Best New Development Projects listing.

Can You List All The Current Shopping and Dining Options? 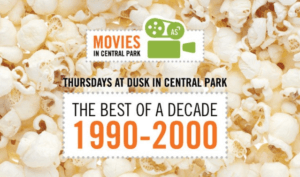 What About the Latest Movies and Events?

Do You Know What’s On the Horizon for the Shops?

Here’s the Latest (Directly from AtlanticStation.com):

Spa 810 is now open! Featuring the latest in beauty and spa treatments, including couples massages and facials.

Salata will open this August as our newest fast-casual dining spot! Salata’s Atlantic Station location will be a first to market for the eatery based out of Houston. Other locations can be found around Texas, California, and Illinois.

Victoria’s Secret is in a temporary location near stairwell 12 while they renovate and prepare for a new concept store.

Z Gallerie is in the process of building out a new store on Atlantic Drive near Publix. The new location will be open in August of this year.

Did You Know That There Is An Atlantic Station Code of Conduct? A Dress Code? And a Curfew That Starts at 6 PM?

Because Atlantic Station is Private Property, for everyone’s shopping and dining enjoyment, a curfew is strictly enforced.  All youth under 18 must be accompanied by a parent.  Curfew is 6:00 p.m. Individuals under 21 are not permitted on property after 11:00 p.m. Any Juvenile groups of 4 or more will be dispersed.

Dress Code Includes:
No Gang Related Clothing.
Pants must be worn pulled up to the waist. Pants, Shorts, Skirts, etc. must be worn in a manner that does not expose undergarments or skin.  No visible undergarments of any kind.
Shoes and Shirts are Required.
Hooded shirts and sweatshirts may not be worn with the hood on unless seasonally appropriate. Hood cannot obscure face.
No clothing with obscene language or that shows more body parts or areas that management deems indecent.

Behave Responsibly By Abiding By the Following:
No solicitation, conducting interviews or distribution of materials.
No professional photography, videos, and audio recordings without prior approval from Atlantic Station Management.
No smoking except in designated areas.
Musical instruments may not be played without management approval.
No shouting, loud noises or boisterous behavior.
No protesting and/or assembling in a manner that disturbs the public.
No littering, defacing or destroying property.
No obscene language.

Allow Others to Shop Safely and Comfortably By Remembering:
No Hoverboards.
No Segways or other personal transport items. Bicycles are allowed and must be secured only at designated bicycle parking areas.
No cruising. All vehicles entering property must proceed directly to the parking garage, valet, or a metered space. No loud music or noise.
No loitering.
No weapons.
No blocking access to any public areas.
No animals, except for leashed dogs, cats, or service animals. (Owners must clean up after their pets.)
Must observe all federal, state, and local laws.
Use of alcoholic beverages is restricted to designated areas.

Just like with a good neighbor in our building, the more you know, the more you can enjoy the company. We are fortunate to have such great neighbors with beautiful stories here at Atlantic and in the neighborhood.