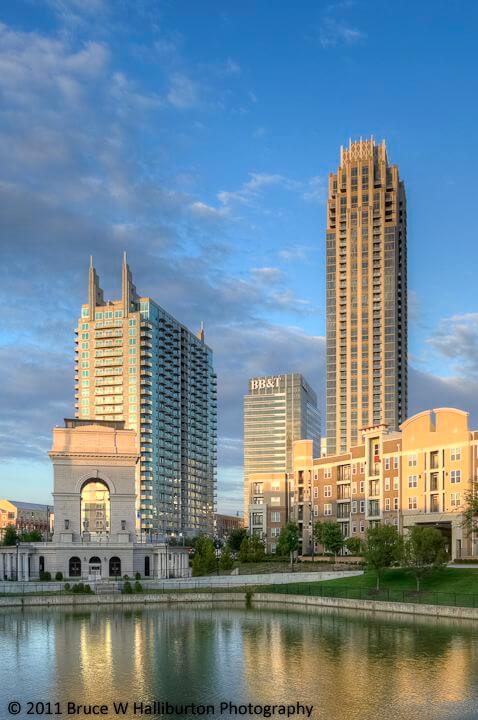 One of our closest neighbors at Atlantic is one that often gets the most attention. Unfortunately, that attention is often in the form of something like this:

Wow, look at that over there! It’s so beautiful. It looks like all of those arches in Europe.

So, what is it exactly?

The Gate, as it is often called is actually The Millennium Gate and thanks to the research and writing from  The Gate Museum’s website, we now have all of the answers to your questions and just as many reasons why it’s time to take a quick jaunt over to visit one of our most beautiful neighbors!

Why the Name  Millennium Gate?

One of Atlanta’s first nicknames was The Gateway to the South in response to Atlanta’s leadership after The Great Depression when our city spearheaded the South’s new beginnings in business. Rodney Mims Cook, Jr. President and Founder of the National Monuments Foundation, explains that one of the original concepts for the monument  (and subsequent mission for the foundation) was conceived in 1999 and established in 2003 to promote the cause of civic responsibility in society and to commemorate the turn of the millennium. 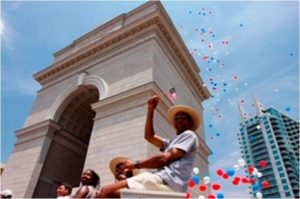 How Did I Miss That? How Long Has It Been Here?

The Arch opened on July 4th, 2008 and took over eight years to build. The monument was the first major classically designed monument built in the United States since the Jefferson Monument.

It’s modeled in the tradition of classical Roman triumphal arches that have been built around the world over the past 2,500 years and while these arches were often used as war monuments, this gate was intended as a place of peace.

A Place of Peace? 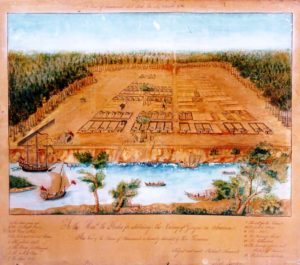 Is There Something Inside of the Gate?

Yes! And you have to see it to believe it!

Inside of the gate houses a 12,000 square foot museum that narrates Georgia’s history through sophisticated interactive technology, film, period rooms, and exhibitions.

The Museum’s mission is to preserve and interpret Georgia history, art, culture and philanthropic heritage as well as highlight Georgia’s historical and aesthetic relevance to the United States and to the world.

Beginning with pre-Columbian Native American history and 16th century Spanish settlement of the coast, the Georgia Pioneer Gallery focuses on General Oglethorpe’s creation of the Colony of Georgia and the enlightenment ideals that were so instrumental in its inception.

The Glenn Gallery, located just inside the entrance of The Millennium Gate, pays tribute to the amazing history of its Atlantic Station site.

Originally the Atlantic Station site was the home of Atlantic Steel, a mill that was started at the turn of the Nineteenth Century and later grew into one of the region’s most powerful companies, employing more than 2,000 workers.
The Glenn Gallery includes a series of photographic exhibits that introduce visitors to the area’s dramatic metamorphosis from thriving steel mill to thriving new town, honoring all of those associated with the mill from its earliest days, including the ordinary citizens and workers who labored in hot and clamorous foundries to make Atlantic Steel one of the most innovative and productive mid-century mills in the country.

The Millennium Gate features three period rooms where you can view and experience the distinct decor and history surrounding these historical times:

The 19th century office of Coca-Cola magnate Thomas K. Glenn during his tenure as president of both Atlantic Steel and the Trust Company of Georgia.

The museum also hosts traveling exhibits that have included:

The Art of Diplomacy: Winston Churchill and the Pursuit of Painting which displayed more than 30 paintings by Winston Churchill, many of which have never before been publicly exhibited and examine the notion that painting may have helped save Western civilization.

Along with many others… and many more to come!

Are Those Beautiful Cherry Trees Important?

To commemorate the 40th anniversary of consular relations with the nation of Japan and Georgia, the Millennium Gate Museum planted 40 Somei-Yoshino cherry trees around the park.

What Does the Inscription Mean?

The Latin translates This American monument is dedicated to all peaceful accomplishment, Anno Domini 2000 and with this carving, the monument unabashedly declares that it has been dedicated to the ideal of peace, and to the peaceful undertakings in Georgia.

Is The Park Symbolic As Well? The Statues? The Plantings?

The three-acre lake sits at the edge of the elliptical lawn framed by a colonnade. The colonnade is surrounded by climbing roses, the symbolic flower of great beauty.

The two 8-foot tall statues, Peace and Justice, rest on 6-foot pedestals and weigh 1.5 tons each. They were cast in England and shipped to Savannah and then delivered to Atlanta via a 10-city tour across the state in a caisson drawn by Percheron horses.

Stoddart’s Peace shows Eirene (eye-REEN-ee), who in Greek mythology represents peace, resting a hand on the shoulder of the young Ploutos, who sybolizes wealth, as she appears to both guide and protect him. As Georgia has come to believe, this statue proves that only peace can nurture wealth.

The second seated statue at represents Dike (DEE-kay), who in Greek mythology represents justice.  In this statue, Dike wears an Egyptian headdress and holds a sistrum, or Egyptian rattle symbolically providing proof of antiquity and universality in the virtue of Justice. 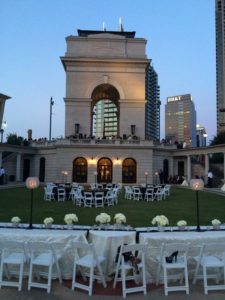 Can You Have a Party There? Get Married There? Just Pop In And Visit?

The event staff can work closely with almost any budget to create elegant and memorable events through a variety of options including: